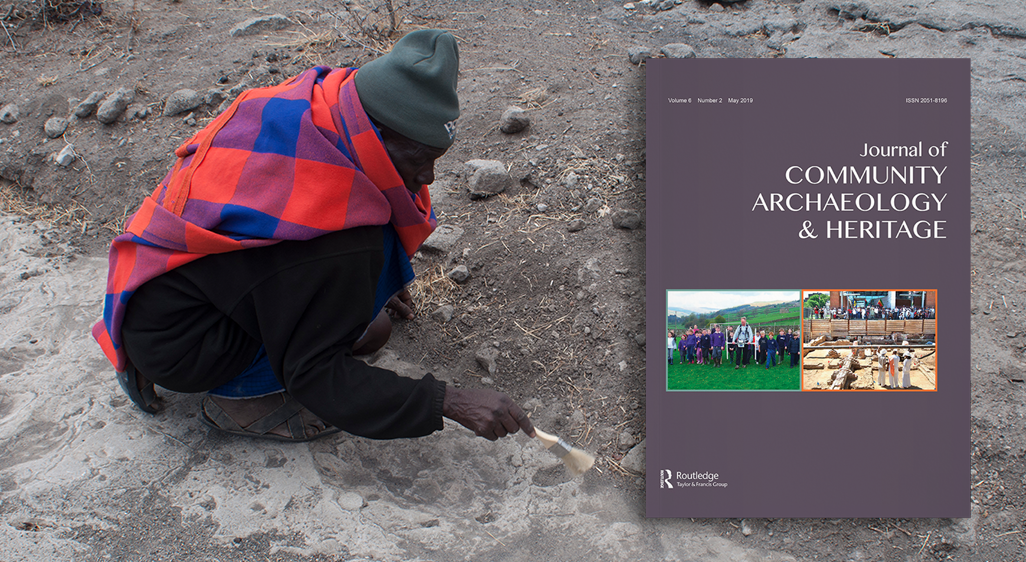 In 1976 and 2014, scientists reported hominin footprints in Pliocene volcanic deposits at Laetoli, north-eastern Tanzania. They hypothesized that the footprints belong to the extinct hominin species Australopithecus afarensis. Not only have the footprints shaped scientists’ understanding of human biological evolution, but they have also placed Laetoli and Tanzania on the world’s paleoanthropological studies map. However, there have been different interpretations of who made these footprints. Opinions of the scientists on the footprints are widely documented, yet narratives of Maasai (local people living around Laetoli) have never been investigated. This paper documents the perceptions of Maasai on what these footprints are, and to whom they belong. We report that concepts related to the nature and genesis of the footprints and who made them form part of the Maasai’s history. Finally, we suggest that for sustainable footprints preservation, local narratives about footprints be integrated into scientific interpretations of the site. 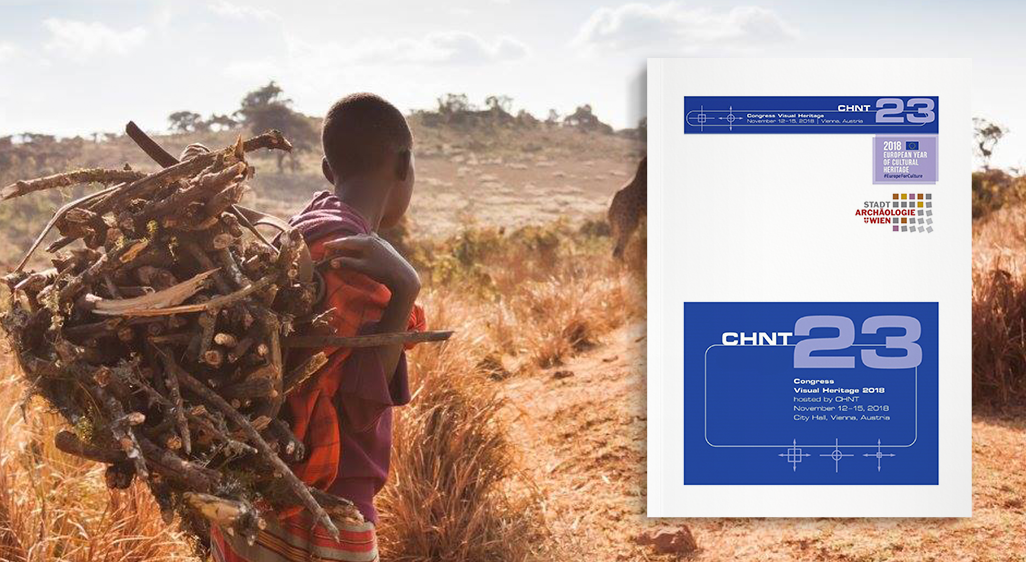 “3D SURVEY IN EXTREME ENVIRONMENT: THE CASE STUDY OF LAETOLI HOMININ FOOTPRINTS IN TANZANIA” Proceedings of the 23rd International Conference on Cultural Heritage and New Technologies 2018, 1-20.

Many cultural assets are in risky situations and they are destined to disappear. Sometimes problems are caused by the anthropic component (e.g. wars) or by natural disasters (e.g. earthquakes and landslides). At other times the cause of deterioration is due to the slow and inexorable action of atmospheric agents and other natural factors present in extreme areas, where preservation of Cultural Heritage is more complex.

This contribution deals with 3D documentation of paleontological excavations in extreme contexts that are characterized by unfavorable climatic conditions, limited instrumentation and little time available. In particular, the contribution is focused on the search for a good working procedure which, despite the problems mentioned above, can lead to valid results in terms of accuracy and precision, so that subsequent scientific studies are not compromised. The proposed case study concerns the recent discovery of fossil footprints at the Site S in Laetoli, within the Ngorongoro Conservation Area (Tanzania), which is a UNESCO World Heritage Site. With the new discovery of Site S it was necessary to implement a 3D survey operative protocol with limited equipment and in a very short time. The 3D models, obtained through the “Structure from Motion” (SfM) technique and topographic support, were used to perform morphological and morphometric investigations on the new footprints. Through the analysis it was possible to estimate height and weight of the footprint makers (hominins of the species Australopithecus afarensis). The collected evidence supports marked intraspecific variation in this species, pointing out the occurrence of a considerable difference in size between sexes and suggesting inferences on reproductive behavior and social structure of these ancient bipedal hominins. The contribution shows how important is to obtain good 3D documentation, even in extreme environment, in order to reach reliable results for scientific analysis. 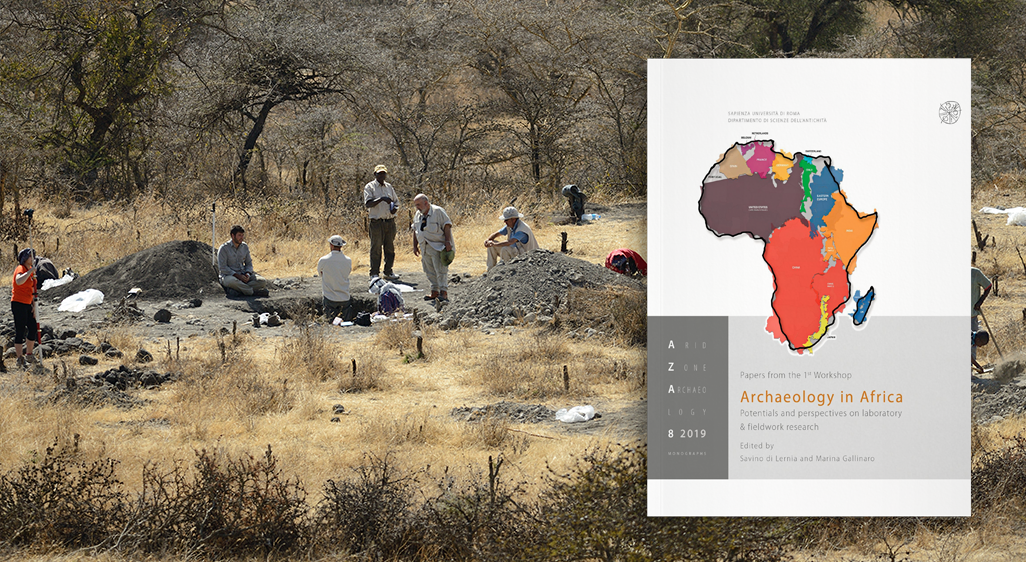 Fossil footprints are of great interest. A number of features help to identify their makers and can be used to investigate on biological and ecological issues. This is of crucial interest in palaeoanthropology, particularly in view of the emergence of our peculiar pattern of posture and locomotion. However, hominin footprints are rare and most of them are ascribed to the genus Homo. The only exception is represented by the trackways discovered in 1978 at Laetoli Site G, northern Tanzania, and referred to Australopithecus afarensis. These footprints were left on volcanic ashes about 3.66 million years ago by three bipedal creatures walking on a humid layer that was subsequently cemented. At Laetoli Site S (about 150 meters from Site G), we have unearthed new bipedal footprints of two different individuals, who were moving on the same palaeosurface, in the same direction and at the same speed as the three exposed at Site G. Our analysis based on advanced photogrammetric methods shows that the estimated stature and related body mass of one of the new individuals greatly exceed the estimates for those from Site G. This evidence supports marked intraspecific variation, pointing out the occurrence of a considerable difference in size between sexes and suggesting inferences on reproductive behaviour and social structure of these ancient bipedal hominins. A research project combined with conservation plans urgently needs to be developed and submitted to the Tanzanian Authorities for the knowledge, preservation and valorisation of such an extraordinary cultural heritage. 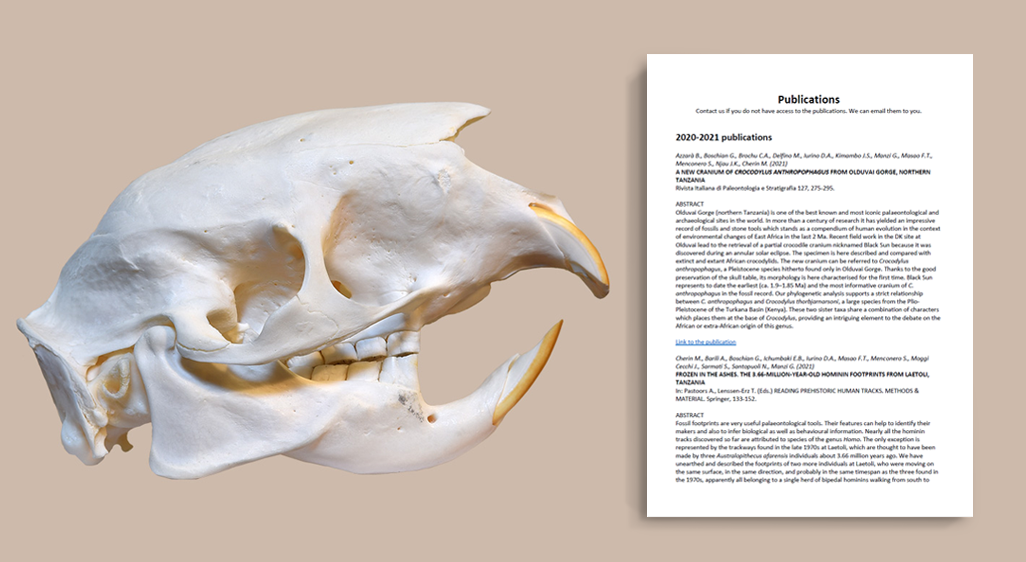 The rodent family Hystricidae includes three extant genera (Atherurus, Trichys, Hystrix) and eleven species, ranging from Asia to Africa and to Italy. This family probably originated in Asia and dispersed in Europe and Africa from the middle-late Miocene. Several fossil species are reported from the middle Miocene to the early Holocene.

Five species of the subfamily Hystricinae occurred in Africa in the late Pliocene and Pleistocene: the extinct Hystrix leakeyi, H. makapanensis, and Xenohystrix crassidens and the still living H. africaeaustralis and H. cristata. Among them, H. leakeyi has the smallest body size, followed by the similar H. africaeaustralis and H. cristata, the medium-sized H. makapanensis, and the “giant porcupine” X. crassidens. Although the overall morphology of the cheek teeth of these species is relative conservative, they exhibit a number of diagnostic characters which are useful for taxonomic purposes.

Here we describe a new porcupine mandible from the world-renowned paleontological and archaeological site of Olduvai Gorge in Tanzania. The specimen was collected from surface of lower Bed II at HWK West archaeological site (Geolocality 44), approximately dated at 1.7 Ma. The morphological and morphometric analysis of the specimen allows referring it to the late Pliocene-early Pleistocene species H. makapanensis. The discovery of the new mandible has prompted a comprehensive review of the entire hypodigm of this species, which was characterized by a wide geographical distribution ranging from East Africa (Tanzania, Ethiopia) to South Africa. 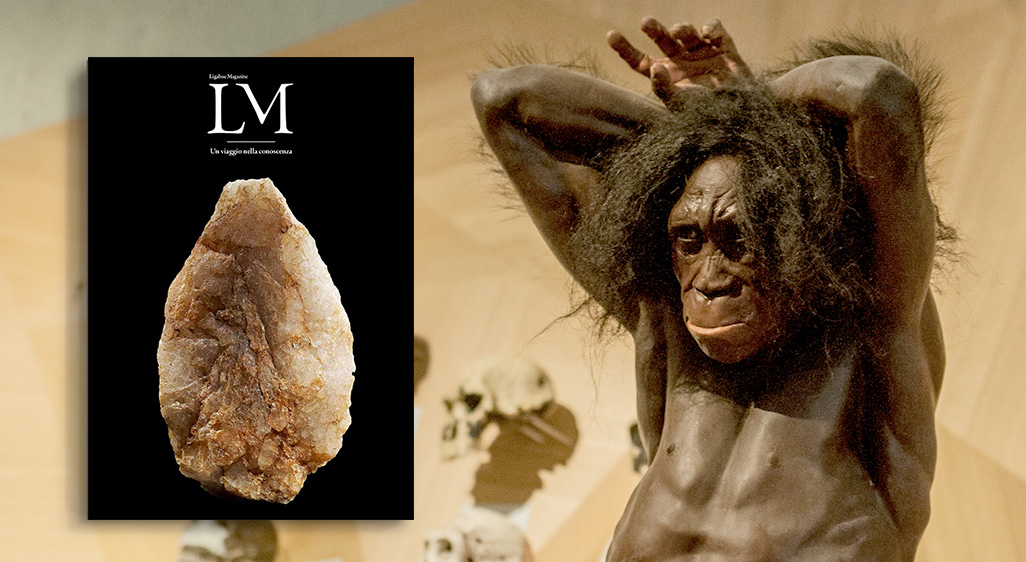 We Homo sapiens belong to the order of primates, as established in the tenth edition of Systema Naturae (1758) by Carolus Linnaeus, an 18th-century academician from Uppsala, Sweden, and an eminent naturalist and Enlightenment thinker. We share so many features (including most of our DNA) with 400 living species of monkeys (and many thousands now extinct) that we can have no doubt about our place in nature.